Art Brass Aerospace Inc. works mainly in the aerospace industry and is a third party vendor for Boeing. They take machined aircraft parts and paint and plate them for machine shops. Their shop started as just a 10-man shop. Recently, they have grown to around 100 people with 40 joining in the past year. Art Brass Aerospace’s rapid growth has given them people to work the jobs, but they didn’t have the planning capacity to match. According to the production manager Ryan Triguerio, “We’ve hit a wall really, we’ve grown but we can’t go any further right now.”

E2 is the tool that’s going to take us to the next level.

Before switching to E2, Art Brass Aerospace was using outdated software that wouldn’t open half the times they wanted to use it. With horrible navigation, a bad user interface, and lack of support, the choice to switch was a “no-brainer” according to Triguerio. The old system was so slow that they couldn’t even plan jobs. Another problem they faced was not being able to scan jobs or track where jobs were on the shop floor. Instead of running around the shop with a picture of parts, E2 shows exactly where the parts are now.

After four years of trying to make that system work for them, they decided to make a change. Since he had used E2 when he previously worked at another company, Triguerio wanted to bring E2 to Art Brass knowing it would help them grow. One reassuring factor of choosing E2 was knowing the training would be minimal for the shop. 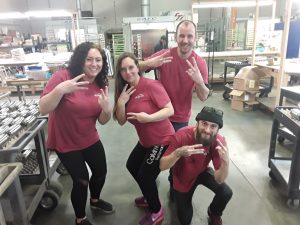 Art Brass Aerospace is currently finishing implementation, six months after they purchased E2. They’ve begun a “soft rollout” starting with writing job travelers and certifying them, printing out packing lists, and doing invoices then sending them to QuickBooks. Some of the future projects they wish to establish include adding pictures to the job travelers, more custom reports, and keeping track of the inventory in E2.

With their old system they could only plan 60 jobs a day, with E2 they can cut the labor required to plan jobs in half. They will also save around eight hours a day certifying jobs. Additionally, invoicing will be much faster and take 80% less time than it was taking on the previous system. Art Brass has found that E2 saves them a lot of time behind the scenes compared to going through multiple windows and clicks for simple processes. Triguerio has been very pleased with their new ERP software saying, “E2 is the tool that’s going to take us to the next level.”