Not A Job Shop? E2 Says No Problem.

PF Technologies, a leader in robotic coatings and decorating for the medical and automotive industries, may not be the typical client for a system like E2. They are not a job shop and do not focus on parts creation or making a special tool for a machine. And while their focus is like any traditional job shop — producing a quality product — their processes are unique and more restricted because of federal and agency regulations.

If you’re like PF Technologies and are looking for management software that breaks a few molds, you might wonder if you’ll ever be able to have a program that can deal with the complexity of your business. General Manager of PF Technologies, Bill Rice, says he found the perfect system in E2. “We chose E2 because it was a good middle ground between being user-friendly and being sophisticated enough to handle the uniqueness of what we do,” says Bill.

Most of these programs are built for job shops and that’s not who we are. To invest in a system that can be customizable was a number one priority for us.

Back in 1993 when Bill started with the company, he helped design and manage the first access system that ran for many years. However, as business became more sophisticated, the system began to crash daily. “The way we ran our business had changed dramatically since the software was built and since the guy who had programed everything was no longer building systems, we were stuck.” 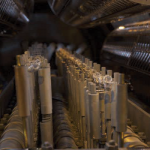 Bill is a big believer that to learn something, you jump in with both feet, make a bunch of mistakes and do it all over again. He decided to run E2 parallel with their old system which helped them learn how to enter parts and dig into the software while not losing too much ground in their day-to-day business. After just 2 months, Bill’s team was able to shut down the old program and run completely on E2.

Bill says E2 is a very logically designed system and he loves that everything is tied together and easily accessible. “We’ve changed forms within E2 and customized based on the industries and clients we serve,” said Bill. Because of the nature of their client’s industries, it’s imperative that the system is robust enough to handle the regulations and quality controls. With agencies like the FAA and the medical industry’s requirements, having everything at their fingertips is crucial to the success of every job.

When it came time for the company to become ISO Certified, the E2 Quality module hit a home run. “We were already on the road to ISO certification but it was a very painful process,” said Bill. “When we saw what the E2 Quality package could give us, it was a simple decision to

add that to our system.” According to Bill, implementing the Quality module couldn’t have gone smoother due to their trainer Ed Parsons. They recently went through the 2015 ISO update and had Ed back out and they “passed with flying colors,” Bill said excitedly.